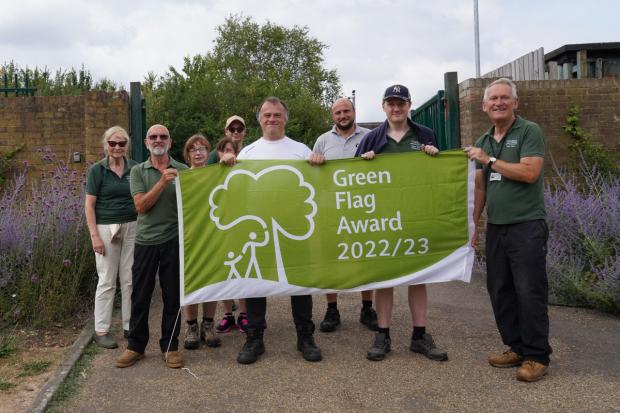 Three Harlow parks have been placed among the best green spaces in the world after receiving Green Flag awards once ahain.

It is Parndon Wood’s 14 consecutive award, the Town Park’s seventh in a row and the Museum Garden’s first.

Previously, Harlow Mill was given a Green Flag status – this year, the award has been extended to encompass the entire Stort Navigation area, which covers 22km.

Volunteers and staff in Town Park

The awards recognise and reward well-managed parks and green spaces, setting the benchmark standard for their management across the United Kingdom and around the world.

Volunteers and staff in Harlow Museum

Harlow Mill is maintained by the Canal & River Trust and local volunteers.

Councillor Nicky Purse, cabinet portfolio holder for environment, said: “This is brilliant news for our town. I am so proud to see the council’s Town Park, Museum and Walled Gardens, and Parndon Wood retaining their Green Flag Awards keeping their places as one of our best-kept green spaces.

“It’s also been great news for the Canal and River Trust with the Harlow Mill Green Flag extending to the Stort Navigation, so my congratulations to them.

Volunteers and staff in Parndon Wood

“These areas are all vital green space for our community here in Harlow. These awards are testament to all teamwork between volunteers and paid staff, who do so much to ensure that the highest possible standards demanded by the Green Flag Award are maintained.

“My sincere thanks to everyone involved in achieving these awards – it’s because of you that we have reason to be so proud of our green spaces.”

In total in Essex, 45 parks were crowned winners this year including country parks, cemeteries, nature reserves and other green spaces.