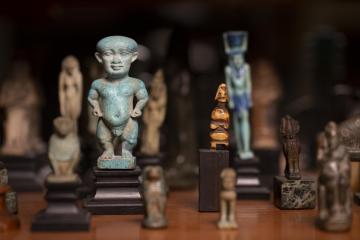 Objects, pictures, and books which surrounded Sigmund Freud as he analysed his patients are the focus of a new exhibition at The Freud Museum.

Freud’s Antiquity will examine the significance of 25 items from the densely packed collection in his former Hampstead home.

A compulsive collector, Freud managed to bring his library, paintings and thousands of objects to London when he and his family fled Vienna in 1938.Sigmund Freud next to his copy of Michelangelo’s Dying Slave 1911 (Image: Courtesy of The Freud Museum London)

“Things arrived” – a seemingly innocuous diary entry in August 1938 – records the moment they joined him in London. With their arrival, he was able to feel “Nazifrei,” or free of the Nazis who had driven them out. Upon hearing the news, his friend and former patient, the American poet H.D. sent a bunch of gardenias with a note ‘to greet the return of the Gods’.

Freud even brought his famous psychoanalyst’s couch, and continued to work and see patients in his Maresfield Gardens study, before dying there in September 1939 – surrounded by his beloved artefacts.Some of the objects and antiquities collected by Sigmund Freud (Image: Courtesy of The Freud Museum London)

The exhibition looks closer at each print, book and object asking why it was important to Freud and how it is connected to his development of psychoanalysis.

Items include a print of French neurologist Dr Charcot teaching a lesson on hysteria, a Roman plaster cast of a walking woman, and an Athenian water jug pointing to Freud’s fascination with the myth of Oedipus.

In Freudian psychoanalysis our relationship with objects exists both pysically and in our imaginations, in the meaning we attach to them. Freud also compared archaeologists digging for artefacts to psychoanalysts excavating forgotten memories.Freud’s Antiquity runs at the Freud Museum in Hampstead (Image: Courtesy of The Freud Museum London)

Tom DeRose, the museum’s Research Manager said: “Freud’s study is an endlessly fascinating source of questions, puzzles and clues to his thoughts, preoccupations and personality. The ‘gods’ sitting in Freud’s study were both evidence of a longstanding fascination for archaeology and collaborators in the development of psychoanalysis.

“We could have chosen any number of objects but by bringing this selection of 25 to the fore we can show how they link to Freud’s theories. In Freud’s study, these objects are on display but effectively hidden from view by the sheer mass of his collection. We’re excited to be excavating to find out what they can tell us today.”This object dates back to the Greek Classic period of 380-360 BC (Image: Courtesy of The Freud Museum London)