The latest data on coronavirus infection rates suggested an increase in the proportion of people confirmed to have the disease in some South West London boroughs.

The most recent data on weekly infection rates for local authorities in England was revealed by Public Health England (PHE) on Friday (July 10).

It showed increases in the number of confirmed cases of Covid-19 coronavirus per 100,000 people in the population in several boroughs of South West London, plus some local authorities in Surrey.

Face coverings are now compulsory on public transport in England.

Some people do not need to do this, including children under 11 and people with breathing difficulties.

The data was calculated based on tests that have been carried out both in laboratories and in the wider community.

PHE excluded data for the most recent three days (July 8 to 10), meaning the figures showed the rate of new cases in the seven days to July 7.

If you have any of these symptoms:

It is vital that you book a #COVID19 test NOW.

The weekly infection rate in neighbouring Richmond was also up from 1.5 to 2.0, and in Wandsworth the rate rose even more sharply, from 2.1 to 3.4 people confirmed positive for Covid-19 per 100,000 people.

Similarly in Lambeth the infection rate rose from 1.5 to 2.1.

In the boroughs in Surrey neighbouring South West London, meanwhile, rates of infection also increased in Epsom and Ewell, jumping from 1.3 to 5.0, and from 1.1 to 3.4 in Mole Valley.

Other areas of South West London reported drops in the rate of people infected with coroanvirus per 100,000 of the population.

“In most of the world, the virus is not under control. It’s getting worse.”

The Director-General of the WHO says the pandemic is accelerating and that we cannot defeat the virus “as a divided world”. pic.twitter.com/Qqx9XTljx8

In Croydon, for example, the infection rate fell from 2.9 to 1.8, while next door borough Sutton reported a more modest drop from 1.5 to 1.0.

According to the World Health Organization (WHO), the UK has 287,625 confirmed cases of Covid-19 during the pandemic so far, with 44,602 related deaths, the most of any European country.

On Friday Director General of the WHO, Dr Tedros Adhanom Ghebreyesus, said the virus was still out of control “in most of the world” and that the global situation of the pandemic is “getting worse”. 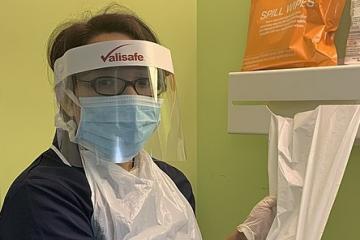 Two lanes are closed on the M1. This Is Local London | News …

Newly re-elected London Mayor Sadiq Khan has revealed details of a £6 million campaign to bring visitors back to London. This Is Local London | News …

A man has died after collapsing on a street in Sutton this morning. This Is Local London | News …

The body of a newborn baby has been found in London’s Grand Union Canal, the Metropolitan Police have said. This Is Local London | News …

The landlord of a popular pub in Bexleyheath has said the focus is fully on the future after a difficult year for the industry, and says things are flourishing after a bumpy reopening. This Is Local London | News …