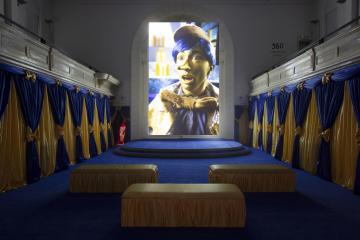 From Methodist chapel to drama school and now contemporary art gallery, the stately Grade II listed building in Prince of Wales Road has an intriguing history.

Built in the late 1860s, it was a place of worship for almost a century before The London Drama Centre took over in 1963. For forty years the likes of Colin Firth, Pierce Brosnan, Tom Hardy and Helen McCrory paced its halls as they learned the Stanislavski method.

When the school moved on, the building was squatted and fell into disrepair before its future was secured by philanthropic East Finchley art collectors Anita and Poju Zabludowicz who restored and reopened it in 2007.Trulee Hall, Tongues Duel the Corn Whores, 2020. Performance (Image: Mike Massaro)

It houses their collection of contemporary artworks, holds cutting edge exhibitions and performances, and supports emerging artists – including Heather Phillipson who was nominated for this year’s Turner Prize.

Now celebrating 15 years in NW5, Senior Curator Paul Luckraft recalls how the Zabludowiczs became “passionate and excited” by the potential of supporting artists by purchasing work.

That was back in the heady days of the YBA artists and since the mid 1990s their collection has grown to 4,000 artworks by 500 artists, with the oldest being 20th Century works by Ben Nicholson and Frank Auerbach.Installation view Jon Rafman, 2015 at Zabludowicz Collection, London (Image: Thierry Bal)

“The collection outgrew their home and and is still growing,” he says.

“They decided to operate as a public venue so the collection could have a different life, and although this building is not a purpose-built white cube space, they fell in love with its character and history.”

The refurb involved improving floors and creating gallery spaces without majorly altering the original building. Luckraft says their exhibitions work to incorporate “interesting niches” and features such as the former Priest’s quarters.

“It’s architecture you can’t ignore, a dramatic neo-classical facade and semi circular space thats great for performances. We try to design an exhibition by working with it not fighting against it, to think about how the audience move through the space.”

Luckraft and senior curator of performance and engagement Antonia Blocker work at the leading edge of the art world, commissioning and collaborating with artists who have often just completed their degrees, have no representation, or are working in new forms such as Virtual and Augmented Reality. Installation view Jon Rafman, 2015 at Zabludowicz Collection (Image: Thierry Bal)

“The families program is well recieved and well attended,” she said. “It’s an interface with local community, they can hang out in cafe, take part in a workshop and see the show.”

Luckraft accepts the contemporary art world is “quite closed off for a lot of the population,” but he is driven by sharing with audiences the “excitement of what contemporary art does, and is, and can be today.”

“Art has so many twists and turns in form, the excitement and energy is not quite knowing what’s going to emerge. For us it’s finding a way be risk taking and experimental with presenting new art that is relevant to the world today. We think about what we can offer to London that wouldn’t otherwise be shown, by providing support to emerging artists and trying to engage audiences.”Mélodie Mousset and Edo Fouilloux, The Jellyfish, 2019–ongoing (still). Interactive VR experience. (Image: Courtesy of the artists)

It’s a career boost for artists to be commissioned by the collection, but the focus is also on developing professional skills which may simply be learning how to write an invoice.

“It’s a tough world to cut through,” says Luckraft. “Where possible we look for artists with interesting practices and resonance. There is no template for being an artist, it’s intuitive, often it’s about a sensibility, they are making work that stands out and cuts through. We meet them at a particular point when they are taking off, and we are part of that journey.

“We help them navigate the field, offer them a platform or a masterclass in learning about things they might not necessarily learn at art school. We help them think critically about their practice and create inroads into showing and selling their work.”

The collection shows work in traditional forms such as painting and ceramics, but many young artists, influenced by the impact of social media and video culture, choose to work with newer tools says Blocker.Rachel Maclean,I’m Terribly Sorry, 2018. Virtual reality installation. Produced in collaboration with Werkflow. Commissioned in partnership with Arsenal Contemporary. Courtesy the artist and Zabludowicz Collection. (Image: David Bebber)

“A lot of artists lean towards working with newer technologies which is becoming cheaper and more accessible.”

Luckraft adds: “They use them to build narratives or worlds and engage with new possibilities or draw no sci-fi. The world is so complex and troubling right now that engaging with new fantastical spaces can manifest in the work.”

LuYan NetiNeti is the latest exhibition at the Collection (Image: Courtesy of the Zabludowicz Collection)One example is their current show by Chinese multimedia artist LuYang NetiNeti which includes a digitally animated film DOKU the Self, and a retro-futurist gaming arcade which visitors can interact with via playable video games. Some have been making films of their visits and posting them on social media, as Blocker says: “We have a lot of people who wouldn’t go to a gallery turning up.”

“Art is such a subjective thing,” muses Luckraft. “We are always thinking about how best to make the programme feel relevant. I think there’s a desire from audiences and artists to come together and share physical space, to re-energise this question around a visual show that expresses something about our lives.” Shana Moulton, The Waterfall of Grief, 2019, exhibition view Zabludowicz Collection, London. Courtesy the artist and Zabludowicz Collection. (Image: Tim Bowditch)

LuYang NetiNeti runs until March 2023. On January 28, the Zabludowicz Collection hosts a live performance by LuYang which uses motion capture technology with two live dancers performing alongside the digital avatar DOKU and a soundtrack by Liiii.

Zabludowicz Collection is at 176 Prince of Wales Road, NW5.https://www.zabludowiczcollection.com/